Sam looked at the 4 different t-shirt themes and wanted to have a Pirate Party for his 4th birthday. Sara and I decided to have it at the daycare next to our community garden. It included an outdoor playground and a kitchen with lots of plates, siver ware and glasses.

While Sara patiently applied the Broc and Cara Pirate iron-ons to 10 t-shirts and made a piñata, I prepared the kale chips, veggies platter and veggie pad thai with dip. To drink, we had freshly squeezed orange juice blended with frozen strawberries and mint…yum!

Here is the order of events: • Kids arrived and put on their t-shirt, homemade Real Food Dude bracelets and made newspaper pirate hats. • Then they jumped around in the playground. • We liked that idea of Morgan, who is 12, reading the kids Broc and Cara story and generally being involved. It seems good for the little kids to hear the veggie message from big kids that they look up to.

Next we told the kids that they where shipwrecked and hungry. • They embarked on a treasure hunt for food hidden in the playground. • Then we all ate the food that reflected what the kids found • They watched/helped make raw chocolate treats. This healthy chocolate was put in the freezer and eaten with the cake later.

After that, we asked them if they were shipwrecked for a long time, would it make sense to plant a garden? Of course they agreed! • They decorated peat pots with paint, glitter, and pipe cleaner handles. • Then they planted up pre-started (by Sara and Sam) seedlings of carrots, burgundy beans and peas. • These were topped off with planter tags with their own names and the plant varieties.

It was finally time for the ice cream and cake. We had two gluten free cakes: one was raw, the other baked. The ‘ice cream’ was raspberries and frozen banana blended together with a power blender. Presents were used/new toys (we made this an option).

We finished off the fun with the homemade piñata filled with non-candy items that was the highlight!

The grab bag was made up of their haul from the piñata (such as super-cool bendy frog and lizard plant ties, dinosaur stickers, large animal-shaped paperclips, mini clothes pins and more) and their crafty plant creation. 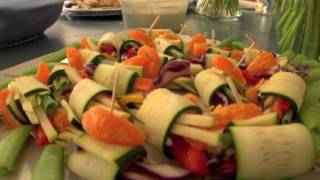